In the summer of 2018, we bought Villema farm and almost immediately moved the whole family there. One of the first questions that my matron asked was, where will our children play? We have three. Would they have anything meaningful to do on the farm yard?

This was obviously a question I couldn’t ignore for long. Still, I had many other burning issues to deal with at the same time. The farm had been empty for 9 years before we moved there. It didn’t have proper waterworks and there were serious issues wherever the eye looked. I had to be smart and innovative.

I found an old wagon from the stable, probably from the time of the old Republic (1918-1940). I bought a plastic slide and installed it as an attachment. Then a few bits of painted balk and a border et voilà – we had a thing!

I’m sure there are people who don’t like it. 🙂 But I’m not one of them. Being a great fan of resourcefulness in general, I think I did a good job of making a useful thing for the kids with minimal expenditure, both in terms of time and money. And it’s quirky look kind of appeals to me. 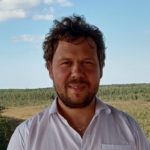